Abbey’s FA Youth Cup dream is over for another year. Despite a gallant effort we bowed out losing 2-0 to Southend Utd at Roots Hall on Tuesday Night…

After winning the last two qualifier rounds against non-league opposition, Barking FC were drawn against a more formidable opposition in Southend Utd. The former league two side still run a full-time professional academy program as they look to bounce back to league status.

The second-round qualifier was played at Roots Hall making a great atmosphere for our young student-athletes. Southend came out strong from the off with Barking FC defence having to deal with some early crosses. In the 13th minute it was Barking defender Jack Turner that prevented Ratcliff from notching his fourth goal of the season after Adedoja had pressurised McEvoy into gifting the winger possession. Ratcliff curled goalwards from 20 yards out but saw Turner block on the goal-line. The visitors gradually grew into the game and Barking striker Mekhi Stanford-Clarke sent a left footed effort over the crossbar from the left-hand side of the penalty area before he also fired wide of the right post from 20 yards. Despite enjoying more possession, Barking was unable to really test Fin Purcell in the Southend goal, and on 29 minutes the custodian watched intently as Stanford-Clarke fizzed another effort across the six-yard box following good build-up play by Callum Sarfas. 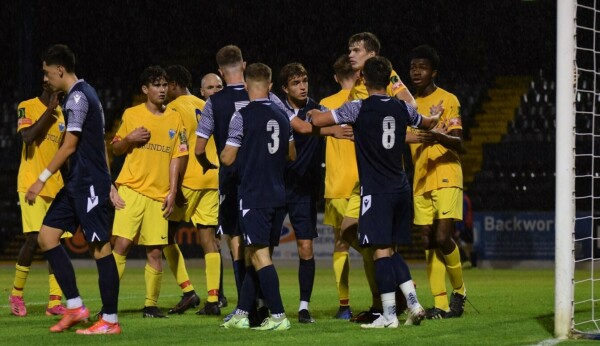 Play then switched to the opposite end, where Adedoja’s powerful run culminated in a good block by Barking defender Feranmi Raji on 32 minutes and Southend’s Captain Crowhurst saw a first-time effort from 25 yards turned over by McEvoy a couple of minutes later.

From the ensuing corner, McEvoy performed more heroics to parry out a fierce Adedoja strike at the near post before Omari Williams drew a good low stop from the visiting gloveman. The first half ended all-square after Garzon failed to convert Adedoja’s cut-back on 40 minutes thanks to the outstretched right leg of McEvoy.

If the Barking goalkeeper had been a thorn in Southend’s side in the first half, then he was to reprise his role four minutes after the interval once Williams had been brought down in the penalty area. Crowhurst struck his penalty well, but McEvoy guessed correctly and pushed the spot-kick to safety.

However, Southend soon took the lead when Captain Crowhurst managed to wriggle past two Barking Defenders before unleashing an unstoppable shot past McEvoy. Barking changed their system in search of an equaliser and thought that they had delivered when Peter Angelov received a fantastic defence splitting pass from Andre Anderson only to see his left footed shot flash past the far post and wide! 10 mins later Southend sealed the win with a 20-yard strike from Garson that found its way past Mc Evoy and into the bottom left-hand corner to seal the 2-0 win for Southend.

“Another great experience for these young student-athletes to play at a professional stadium in front of crowd is something they will remember for years to come and can only be a great memory. We didn’t come here to make up the numbers! We knew we could create chances with the quality we have got in this team, and we definitely pushed Southend Utd all the way! The boys should be very proud of their performance against a full-time professional academy”